The shots that make you crave winter

The shots that make you crave winter

Seasons come and go but the pictures stays right there. Here are a couple of shots we still drool over from this past winter.

In February we spend the night on Åreskutan since the weather looked bangin’ for the coming day. Edvin Olsson mostly impresses soaring thru the air but he proved to be on of the greatest sprayers as well, laying out an uncharacteristic mega spray (for being in Sweden) on the backside of Åreskutan. Some peoples balls just grow bigger each year. Sverre Liliequist proved his haven’t stopped growing when he popped a backie of a windlip in light speed (to an extremely flat landing). Oh, and he did it twice. The skiing phenomenon managed to win Östra Ravin this season at the tender age of 35. Ok, maybe he tied it with Albin Holmgren, but to backflip highest highest for the first time at that age is nothing short of awesome. This shot is of him just jumping it but it’s just so damn nice. 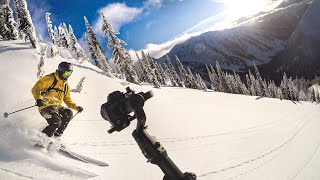